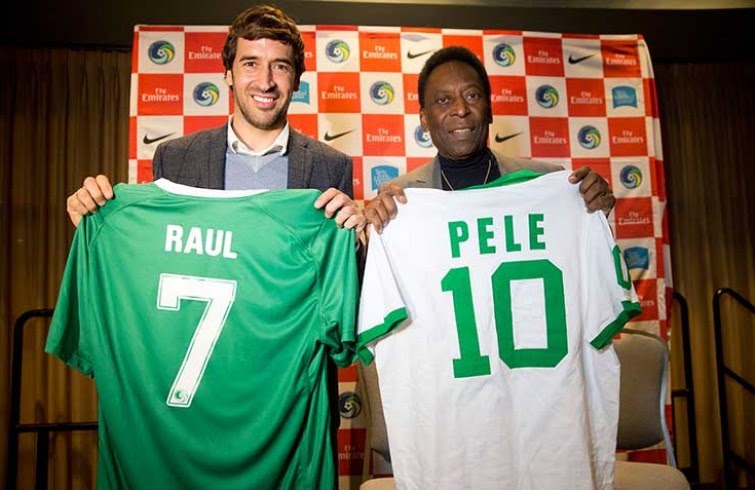 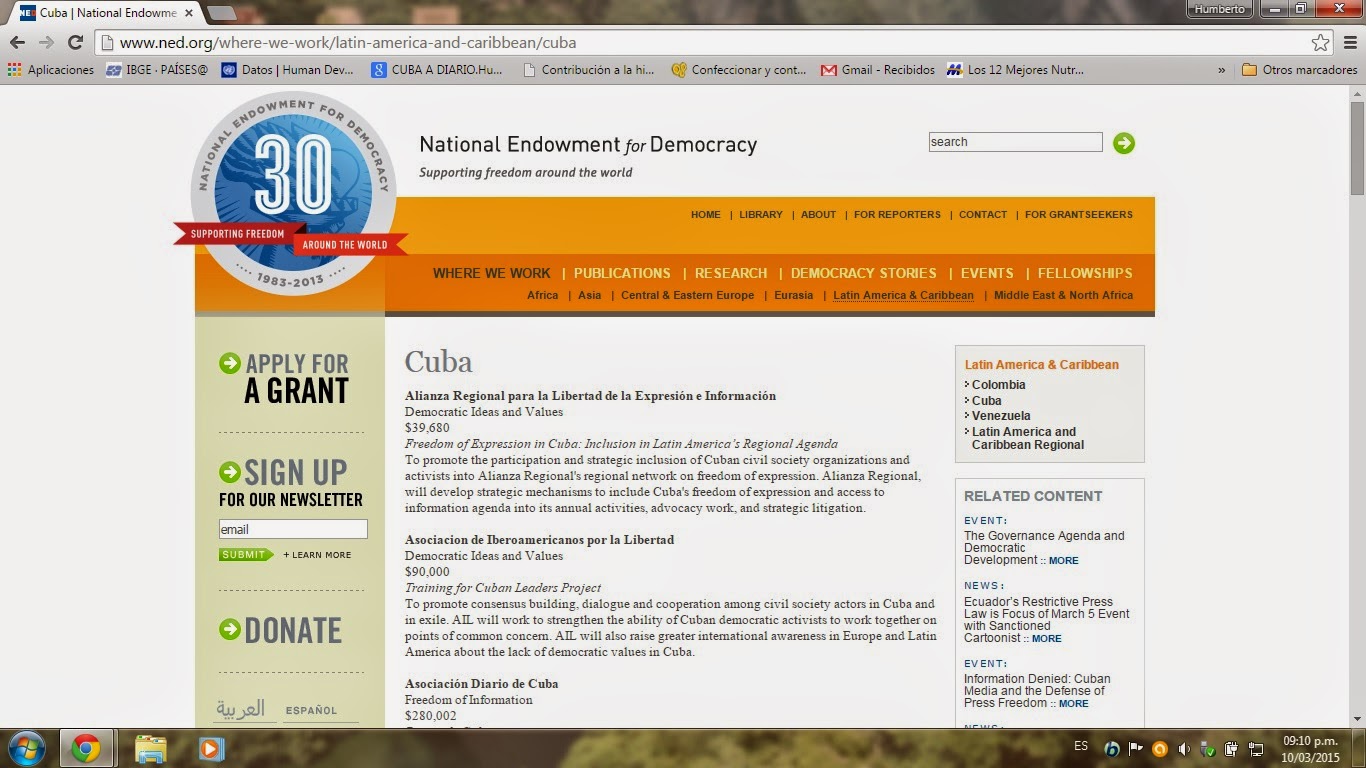 Asociacion de Iberoamericanos por la Libertad
Democratic Ideas and Values
$90,000
Training for Cuban Leaders Project
To promote consensus building, dialogue and cooperation among civil society actors in Cuba and in exile. AIL will work to strengthen the ability of Cuban democratic activists to work together on points of common concern. AIL will also raise greater international awareness in Europe and Latin America about the lack of democratic values in Cuba.

Center for a Free Cuba
Human Rights
$102,000
Promoting Democracy in Cuba through Support to Civil Society
To provide humanitarian assistance to political prisoners, their families, and human rights activists in Cuba. In addition to humanitarian assistance, CFC will provide independent, democratic activists with technical equipment that will permit them to carry out their work in a more effective manner.  CFC will also promote civic and democratic values among Cuban youth through a week-long training program in Europe.

Cuban Democratic Directorate
Freedom of Information
$650,000
Increasing Access to Uncensored Information
To promote greater freedom of information and civic activism in Cuba.  Through its Radio Republic broadcasts, Directorio will provide programming that incorporates the views of Cuban pro-democratic activists and informs communities about local social, political, economic, and cultural developments. Directorio will also supply training and technical assistance to local grassroots activists to carry out civic and community-building initiatives throughout Cuba.

Cuban Soul Foundation, Inc.
Democratic Ideas and Values
$75,000
Independent Cuban Artist's Freedom of Expression
To empower independent artists to produce and perform their work in uncensored community venues and events. CSF will also help organize a series of events to showcase the work of artists participating in this program.

Evangelical Christian Humanitarian Outreach for Cuba
Democratic Ideas and Values
$60,074
Advocating for Freedom of Religion in Cuba
To foster greater freedom of religion in Cuba.  EchoCuba will work with partners to hold film screenings that encourage discussions on freedom of religion and to produce and circulate a religious magazine that has garnered attention in religious communities. A new component of the project will include blogs written and published to a worldwide audience on the topic of religious life in Cuba. To complement this activity ECHOCuba will work with on-island partners to convene and promote community forums and discussions on key topics related to democracy and freedom.

Fundación Hispano Cubana
Freedom of Information
$80,071
Strengthening the Capacity of Civil Society
To strengthen the work of civil society in Cuba and facilitate greater collaboration among local organizations.  Fundación Hispano Cubana will support Cuban civil society organizations with technical and material assistance in order to increase the impact of their work.  FHC will also help democratic activists in Cuba develop more effective strategies for disseminating information about their work and communicating with  fellow citizens.

Global Rights - Partners for Justice
Human Rights
$22,283
Increasing the Knowledge of Civil Society Activists on International Human Rights Instruments
To enhance the knowledge and the capacity of Cuban civil society activists about international human rights mechanisms. Global Rights will carry out trainings on the UN and the OAS Inter-American Human Rights Systems.  With Global Rights' support, the trainees will draft human rights reports and will present them to relevant monitoring agencies of the UN and the IACHR.

Instituto Cubano por la Libertad de Expresión y Prensa Inc.
Freedom of Information
$107,000
Promoting Community Reporting in Cuba
To promote greater freedom of information in communities throughout Cuba. ICLEP will support grassroots groups across the island and help them develop community-based publications that can be distributed to local residents. ICLEP will also provide its counterparts in Cuba with the equipment and technical assistance necessary to implement the design and printing entirely inside Cuba.

Instituto Político para la Libertad Perú
Freedom of Information
$85,000
Educating Activists on Democracy, Technology and Social Media
To provide Cuban pro-democracy activists with training on democracy and the use of the Internet and social networking media.  IPL will provide youth and other pro-democracy activists with training on democratic rights, access to information tools and international standards of freedom of expression.

International Platform For Human Rights In Cuba
Human Rights
$75,000
Advocating for a Human Rights Framework for Cuba
To advocate for the inclusion of human rights into the European Union process of negotiations with the Cuban government.  IPHRC will work with a diverse group of Cuban pro-democracy activists to enhance their understanding of the EU - Cuba bilateral negotiation process and capacity to advocate before the EU for the inclusion of human rights in the negotiation agenda.

Lech Walesa Institute
Civic Education
$100,000
International Support and Solidarity with Cuba
To enhance the knowledge of Cuban activists about democratic transitions. LWI will organize a conference on the lessons of the Polish transition for democracy in Cuba. LWI will also carry out training on human rights, leadership and advocacy skills, and consensus building techniques.

People in Peril Association CVO
Democratic Ideas and Values
$90,000
Promoting Access to Unbiased Information
To enhance the capacity of pro-democracy activists to think critically about the prospects for a democratic transition in Cuba. PIPA will work with groups of independent lawyers, bloggers, teachers, and community organizers to strengthen their institutional capacity and ability to carry out their activities more effectively.

Plataforma de Integración Cubana
Freedom of Information
$100,892
Promoting Racial Integration
To promote greater discussion of racial issues in Cuba. Working with academics and activists inside and outside the island, Plataforma will publish a journal on issues affecting the Afro-descendant population. In addition, Plataforma will conduct various public events to raise international awareness of the subject.

Civic Education
$110,000
Promoting Democratic Leadership and Values in Cuba
To promote democratic values and ideas and strengthen the leadership skills of pro-democracy activists in Cuba. The organization will carry out a training program on peaceful activism, community organizing, and democratic values to reach civil society activists across the island.

Democratic Ideas and Values
$13,052
Promoting Youth Leadership and Participation
To strengthen the institutional capacity of the organization and to promote democratic values and political participation among youth in Cuba.  The grantee will carry out cultural activities, debates on youth-related issues, and organize workshops on human rights monitoring and documentation.

$55,250
Providing Legal Assistance in Cuba
To provide technical assistance to citizens seeking legal redress and training to pro-democracy activists on the use of domestic and international legal mechanisms.

Supplement: $9,336
Providing Legal Assistance in Cuba
To provide technical assistance and legal advice to citizens seeking legal regress. In addition, this organization will provide training to pro-democracy activists on the use of domestic and international legal mechanisms.
Grant descriptions are from the 2014 NED Annual Report. 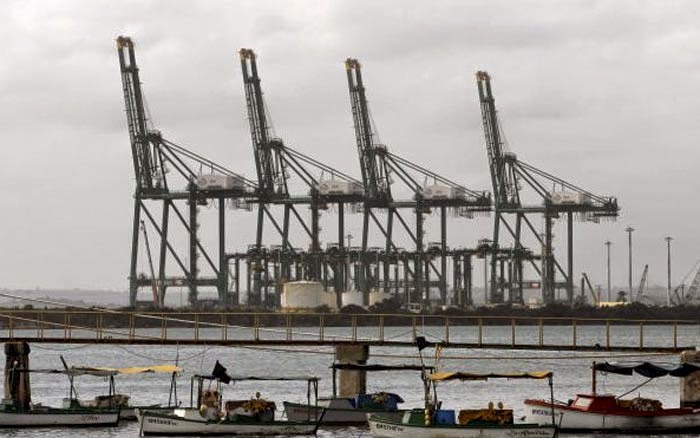 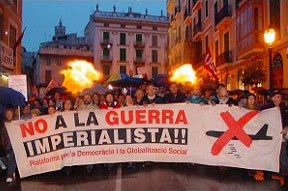